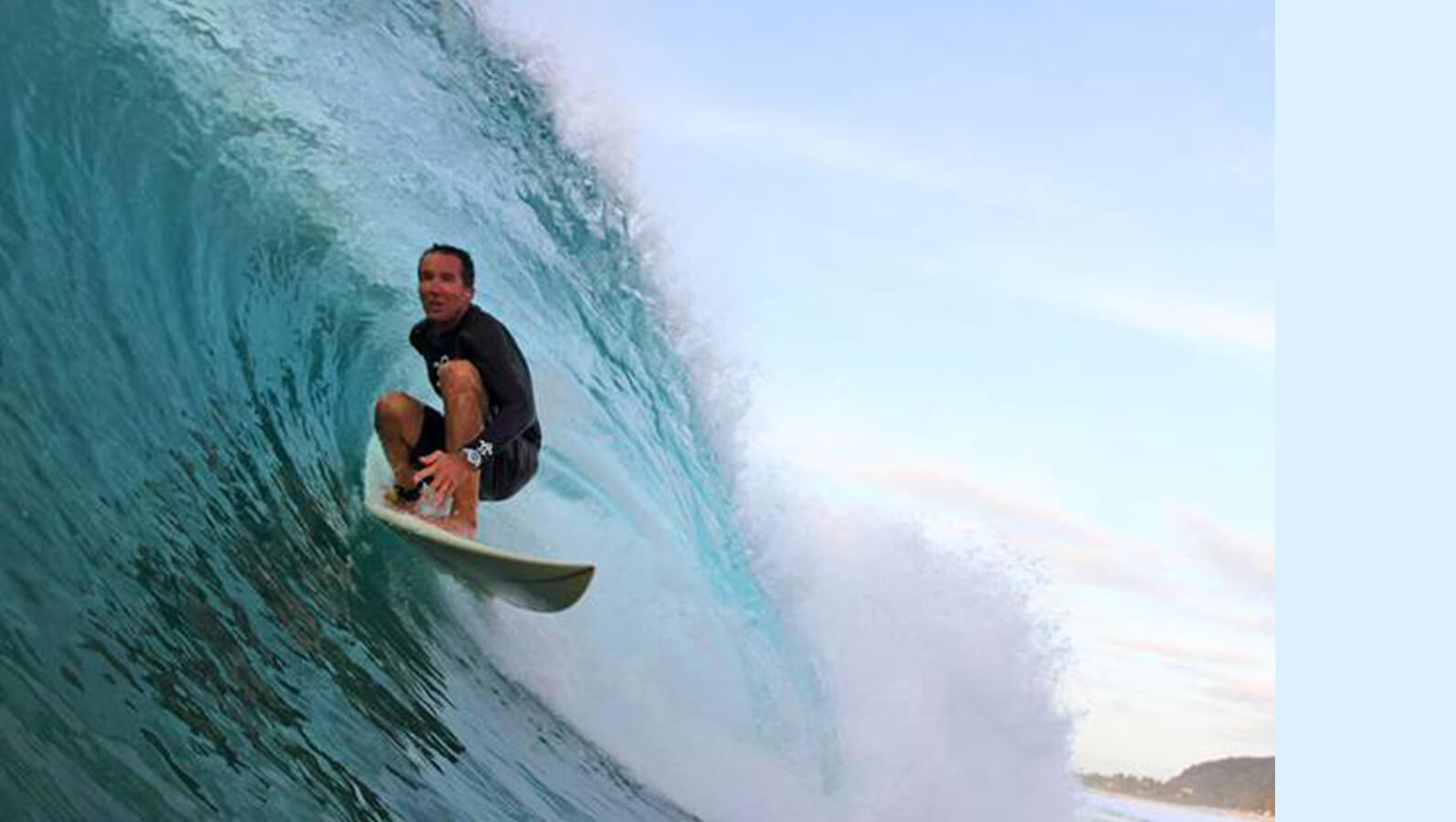 Ultra realist painter of fantasy landscape / seascapes, Steven Power is continuing to gain reputation with art collectors worldwide. With each new piece that Steven creates the level of excitement in the galleries and throughout the art community increases.

The comments from those visiting the galleries are often the same, whether from Japan, Australia, England, the U.S. or even Texas! “Steven’s work captures the essence of Paradise!”. “It’s as though you can walk right into his vision of paradise” his paintings definitely have that effect on you.......

Ultra realist painter of fantasy landscape / seascapes, Steven Power is continuing to gain reputation with art collectors worldwide. With each new piece that Steven creates the level of excitement in the galleries and throughout the art community increases.

The comments from those visiting the galleries are often the same, whether from Japan, Australia, England, the U.S. or even Texas! “Steven’s work captures the essence of Paradise!”. “It’s as though you can walk right into his vision of paradise” his paintings definitely have that effect on you.

Steven has had a long love affair with the ocean and nature in general, his many years of surfing throughout California, Mexico and Hawaii searching for the perfect uncrowded wave, as well as exploring the mountains and deserts of California, Arizona and Nevada provide the inspiration for Steven’s fantastic imaginary scenes.

Images that some say are “believable, yet at the same time almost unbelievable”

Born in 1956 in Detroit, Michigan, but raised at the beach in Los Angeles, Steven and his brothers took to surfing at an early age. Steven has been a dedicated surfer ever since.

Steven has been capturing his adventures with pencil and paint for virtually all of his life.

Steven’s father John Power is an excellent automotive / commercial designer and all around artist. Trained at the prestigious Art Center College of Design in Pasadena California.

Steven has derived much of his technique from the years he spent watching his father work on a variety of different projects, absorbing the tricks of the trade from him. Steven has been an artist for “As long as I can remember”

Steven has had a wide range of experience; he has been commissioned to do many different types of projects throughout his career, ranging from creative set painting and studio backdrop creation for rock videos and film productions, to sculpture and fine art commissions.

Steven also spent many years working with architects and interior designers creating murals and fantastic faux finishes in some of the finest homes throughout California and Hawaii.

It’s a great honor to have been chosen so often to be a part of surfing history.

At this point I am focusing primarily on Fantasy Tropical images that would evoke a sense of pristine solitude, a safe place, a peaceful “garden of Eden” mood”. A place that we would all like to go to relax and unwind. But at the same time I want to portray the awesome power of nature that I encounter while traveling and exploring the oceans of the world.

Because of a lifetime spent in and around the ocean and nature, Steven is acutely aware of our responsibility to be dedicated to preserving a clean environment in a fair and responsible way.  Steven is optimistic concerning the environment and not inclined to see mankind as the enemy of the planet.  Steven is an advocate of an emerging new school of “Smart Environmentalism” an “Eco-Realist”.  Steven is careful to sort out fact from fiction when it comes to environmental issues.  “I am an eco-optimist, I believe that there is a bright future ahead.

Technology has been the source of wonderful advancements in the quality of life for the entire human race.  It has made all of our lives easier in many ways that we often take for granted.  Just ask your grandparents if they would like to go back to the days of the horse and buggy with all of the lovely things that came with them i.e. horse droppings, flies everywhere all the time.  Imagine life without electricity, no refrigerator no air-conditioning in the summer, etc.  “I believe we will continue to employ our knowledge and ingenuity to develop better solutions to the environmental challenges that we will inevitably face as we work together for a better future on planet earth”

If Steven is passionate about his artwork he is equally passionate about his beliefs. “As a Christian, I am dedicated to giving honor through my artwork and my life to the greatest artist, the one who I believe created all of this natural beauty in the first place. God is truly awesome, and the real inspiration behind everything that I paint. While some choose to believe in ‘Mother Earth” I choose to believe in “Father God” who is alive and capable of careful design and deliberate creation. I believe that I will become a better artist as I seek to understand how He has created this beautiful world that we find ourselves in. 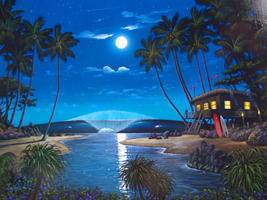 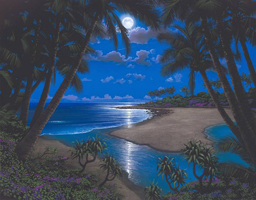 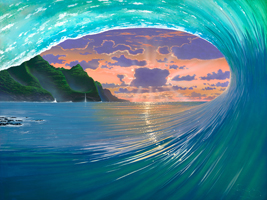 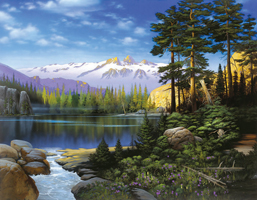 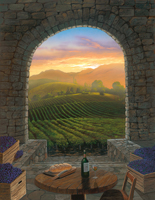 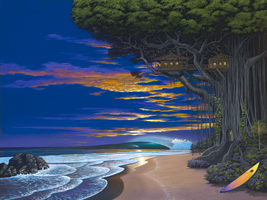 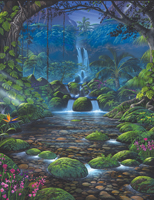 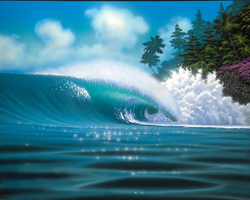 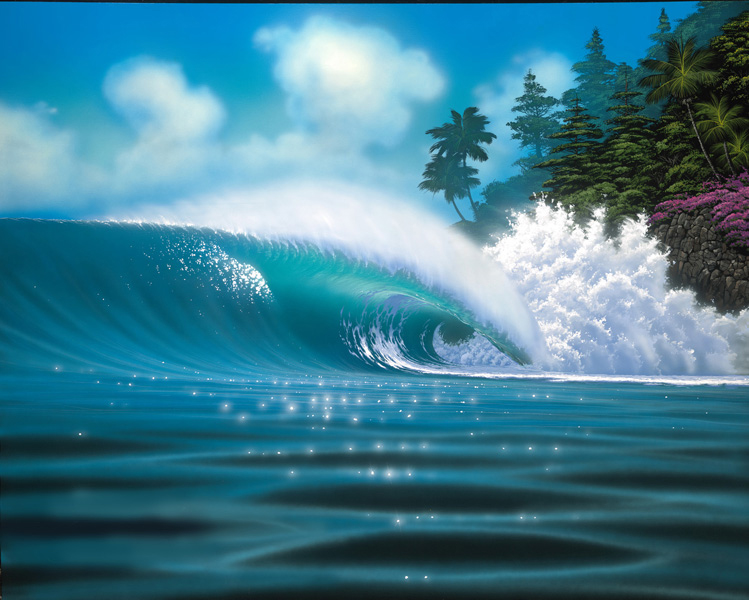 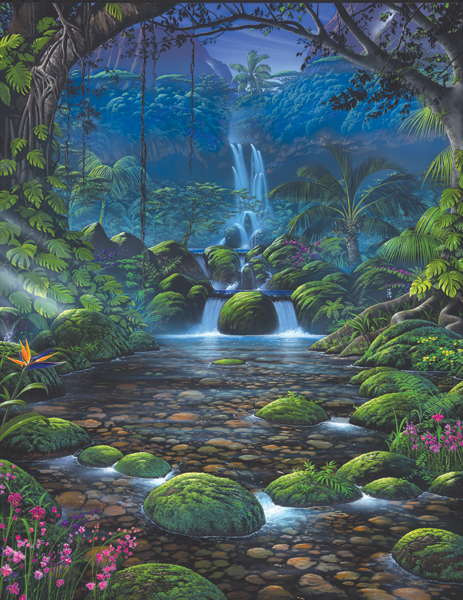 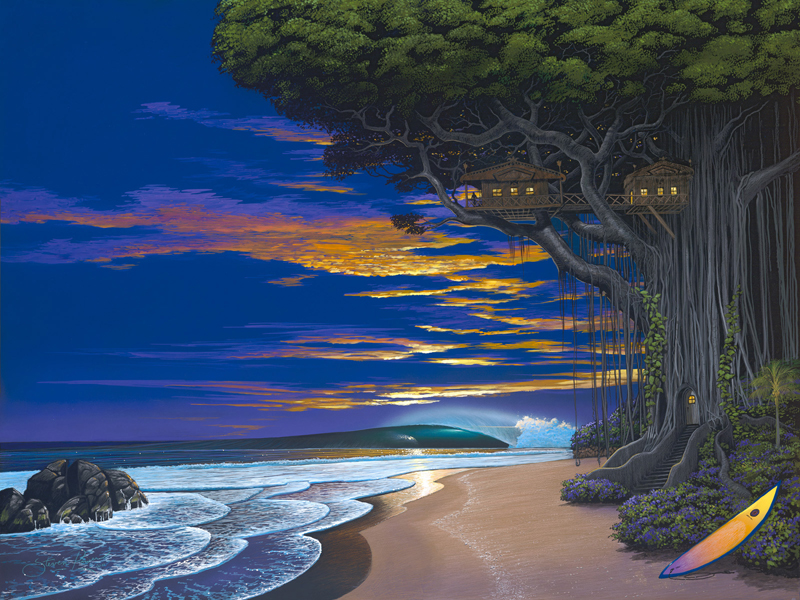 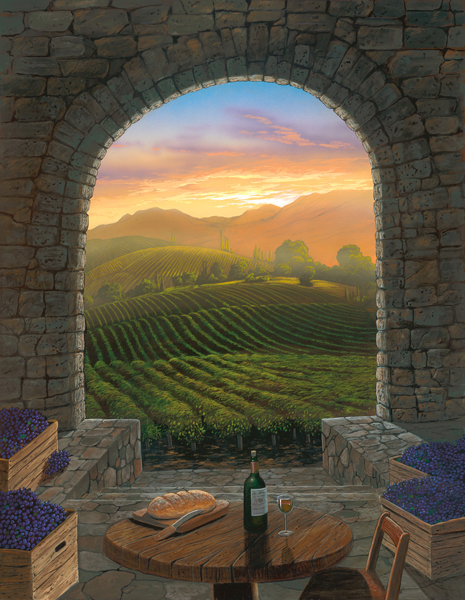 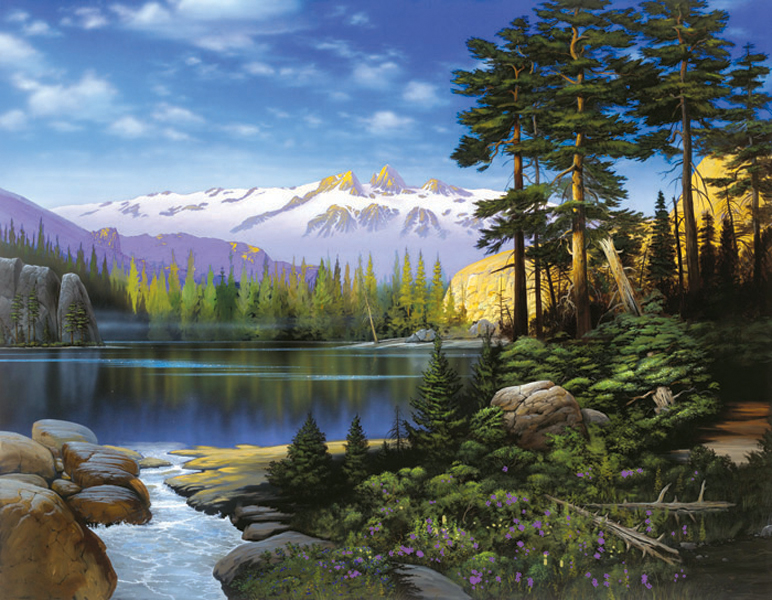 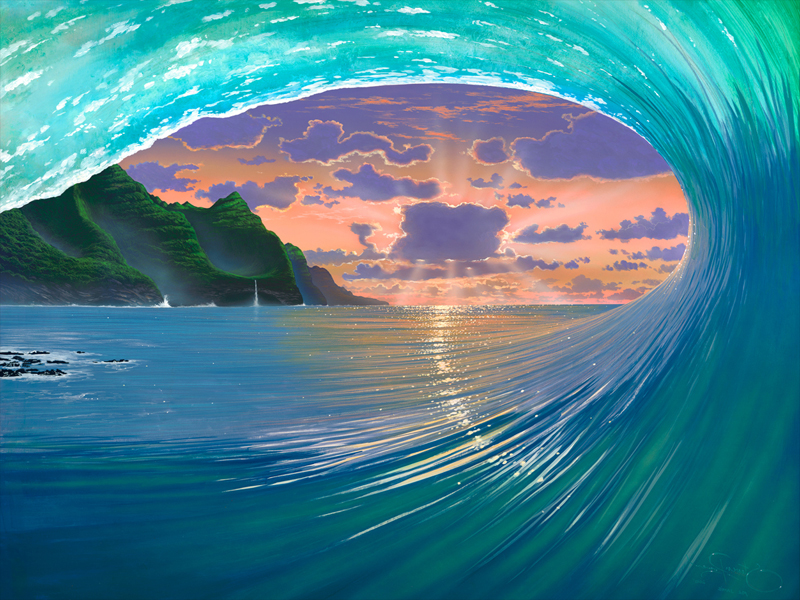 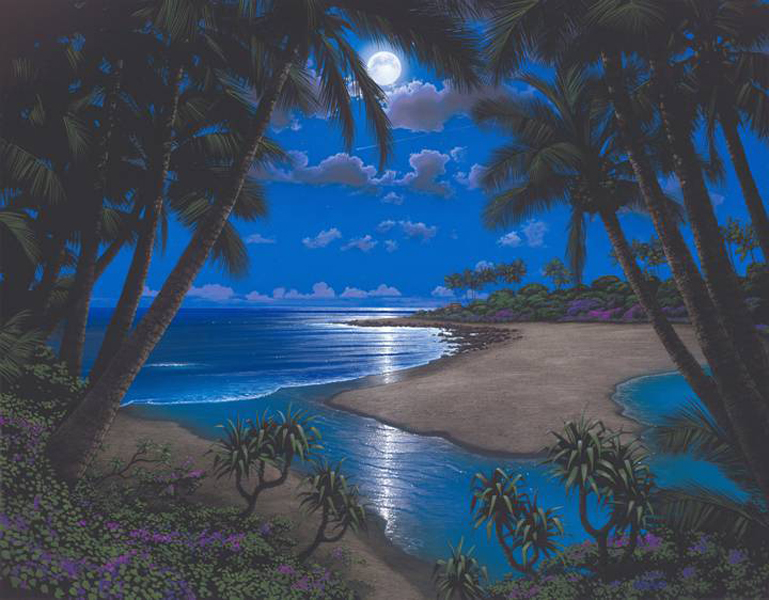 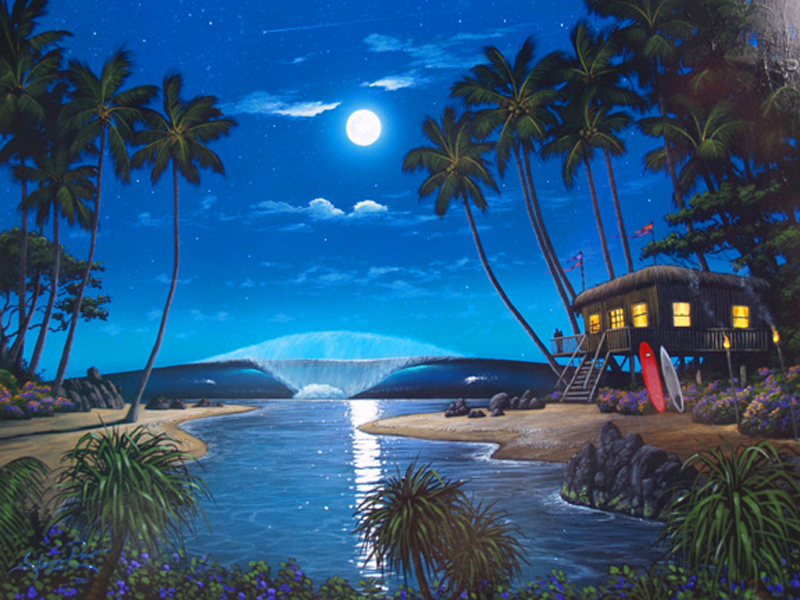